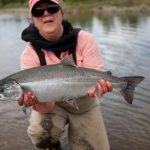 Sally Tanner and Pat Hofstetter are two women of extraordinary accomplishment. Now in their 80s, they will be spending the first half of next week fishing for salmon on the Rogue River in Oregon.

Sally is a former member of the California State Assembly. She represented a district in the San Gabriel Valley from 1978 to 1992. Pat is a former Los Angeles Superior Court Judge.

After their retirements, the two long-time friends went on a fishing trip to Oregon. On the way back they drove through the little town of Ferndale, just south of Eureka near the California Coast in Humboldt County. Sally fell in love with the town and its many beautifully restored and maintained Victorian homes. If there is anything Sally loves as much as politics it’s fishing and Ferndale is handy to some of the best fishing rivers in Northern California and Southern Oregon. Pat, who also likes to fish, agreed and the two of them bought a Victorian house in Ferndale and completely restored it. They did all the work with their own hands and the advice of the owner of a local hardware and building supply store.

Jennifer and I stopped to visit Sally and Pat yesterday on the way back from a visit with our son, daughter-in-law and two grand children in Washington. We’ve stopped in Ferndale to visit Sally and Pat frequently over the years and we have been treated to home cooked dinners that featured salmon or sturgeon they caught themselves. This time we went to a local restaurant for dinner. Then it was back to their house, where we talked into the night. This morning, we were up early and drove the beautiful Redwood Highway to Aptos Beach, where we will spend two days visiting with friends.

I met Sally on a Sunday afternoon in February of 1978. I was at home, preparing to go to a fundraising event for a client whose campaign for State Senate I was handling. The phone rang and when I answered it the voice on the other end said, “HelloMyNameIsSallyTannerI’mRunningForTheAssembyInThe60thDistrictAndEveryoneSaysIshouldTalkToYou.”

That’s just the way she said it – one long word. We got together later that day at her home in El Monte, liked each other instantly and agreed that I would run her campaign for State Assembly. We won the Primary Election in June, and in the November General Election Sally became the first women ever to win a partisan elected office in the San Gabriel Valley.

Sally’s career in the Assembly was remarkable. Though her education and professional background was in graphic design, she became the first chair of the Assembly Committee on Environmental Hazards and Toxic Substances. Though she gained fame as the author of The Lemon Law, which protects consumers against being stuck with faulty automobiles, it was in the area of the environment that she made her greatest impact. Her reputation grew quickly and soon she was the pre-eminent legislator in the nation in the area of hazardous materials and toxics.

I didn’t meet Pat until many years later. She was appointed to the bench in L.A. County in the early 1960s. She served for some 30 years. In addition to becoming the first woman President of the California Judges’ Association, she will proudly tell you she was the first woman to win the golf tournament at the annual Judges Association state convention. That happened after the men who were running the tournament at the time tried to make her play in the judges’ wives division. “I’m a judge, not a judges’ wife,” she insisted. She prevailed and the next year won the tournament.

Sally and Pat met in 1956, when both were volunteering in Adlai Stevenson’s Presidential campaign. Their paths crossed frequently as they each became more and more active in volunteer political activity for Democratic candidates. The friendship grew over the years as Pat went on the bench and Sally raised her two sons and ultimately went to work as Administrative Assistant to Assemblymember Harvey Johnson.

For all they have accomplished in their lives, they become most animated, when talking about how they became the first women to win the CAL-ORE Steelhead Fishing Derby. The first year they entered the catch-and-release event to raise funds for preservation of fisheries near the California-Oregon border, they won the team competition for most fish caught and Sally won the individual competition for most poundage caught. They came back the next year and won again.

Next week on the Rogue, however, it won’t be catch and release. Their catch will go home with them to Ferndale and will show up on the dinner table at their home and the homes of friends who share in the largess.

Chapter Seventeen – July 29, 2010 – A FOOD LOVER’S TREK has tracked the travels of Table Talk editor Larry Levine and his wife Jennifer from Los Angeles to Fairbanks Alaska and back into California. They will return home Saturday. You can catch up on their travels http://www.TableTalkatLarrys.com