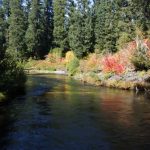 It was an act borne of utter desperation. I asked the young woman who checked us into the Holiday Inn Express in Grants Pass Oregon for the best restaurant in town.

She immediately answered, “Taprock Northwest Grill, on 6th near the river.”

“What about Rivers Edge?” I asked. It was a place at which we had eaten during earlier stops at Grants Pass. The views of the Rogue River were magnificent. The food and service kept getting worse with each visit until we finally decided to not go back. I was testing her.

“It burned down,” she answered.

Another young woman came out from a back office. “No, it was Rafters that burned down,” she offered. “Rivers Edge closed down. It was foreclosed.”

She got out a local map and highlighted the route to Taprock, which turned out to be a pleasant looking place, with one level of indoor seating and two lower levels for outdoor seating, all overlooking the river. Nice enough on a summer’s night with the temperature lingering around 94 at 6:30 p.m.

The parking lot was jammed – overflowing into the bank lot next door. A good sign, we thought. I dropped Jennifer at the door and went in quest of a parking space. When I walked up to what looked like the front door, a gentleman told me that room was for the seminar. Now I understood the parking situation. Inside the actual restaurant I found Jennifer already seated. It wasn’t full but the outdoor levels were packed. Another good sign.

I had looked at the menu on line, so it wasn’t a complete surprise. But there was a different reality attached to holding the actual menu. After one read through, I decided the restaurant was owned by the local heart surgeon. Everything on the menu included some form of cheese, bacon, cream or a combination of these. Even the mashed potatoes came with pancetta and cheese.

I ordered the rotisserie chicken. The menu said it was flavored with “our mixture of garlic, herbs and pancetta bacon.” I missed that on the online menu.

Ha. They got me. The mixture was under the skin so all that salt from the bacon could be absorbed into the meat. That made it official – there was not a single thing on the menu that was safe for a cardiac bypass survivor to eat.

“Maybe that’s just what people like to eat here,” Jennifer responded to my observation regarding the owner being a heart surgeon.

Back at the hotel, I Googled “Fine Dining Grants Pass”. I turned up 30 restaurants, including a Taco Bell and a KFC, but no Taprock Northwest Grill.

I don’t really get it. The Rogue River runs right through town. The Umpqua is not far away. This is fish country. People travel long distances to fish these two rivers. So, why is the halibut crusted in Parmesan cheese and the salmon buried under Hollandaise sauce? I know. I could ask for the halibut just grilled or have them hold the sauce on the salmon. But I’ve learned through experience – places that offer salmon under Hollandaise sauce are trying to hide the salmon. As for the halibut, to me it’s either Alaskan or none.

I know not every person is a gourmet or a gourmand. But the taste of the American public and the disrespect with which many restaurants treat the food they serve confounds me. Taco Bell? KFC? No wonder obesity is out of control. They just don’t care, do they?

Anyway, the chicken was tasty and moist and the steamed summer squash that came with it was nice. Jennifer had meatloaf that was made with beef and pork and filled with minced onions and cheddar cheese. She said it was good and she should know. She makes the best meatloaf I’ve ever eaten. People who don’t even like meatloaf request Jennifer’s meat loaf.

Chapter Fifteen – July 27, 2010 – A FOOD LOVER’S TREK tracks the travels of Table Talk editor Larry Levine and his wife Jennifer from Los Angeles to Fairbanks Alaska and back. Tomorrow we return to California, where we will spend a night visiting friends in Ferndale and then two nights visiting friends in Aptos Beach before heading for home. If you are enjoying these writings please pass the link on to a friend – http://www.TableTalkatLarrys.com