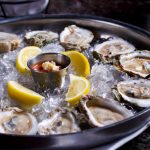 I don’t know of a better town for oysters than Seattle.

It’s not that there aren’t good oysters in other places. Gulf coast oysters were excellent before the oil spill. Now, we’ll have to wait and see. I first tasted them at Acme Seafood in New Orleans, for my money the best food and most fun of any New Orleans restaurant. We sat at the counter and I told the counter man I wanted half a dozen oysters to start with, while I read the menu. That was the night I learned there is no such thing as half dozen oysters at the counter at Acme Seafood. He started shucking oysters and putting them on the counter – no plate – in front of me, one at a time, while serving other folks at the same time. I have no idea how many oysters I ate that night. He kept them coming until our food order was ready. Then he charged me for half a dozen oysters.

Anyway, when it comes to a variety of locally harvested oysters I don’t know of any place that can match Seattle, and that’s where we are for the next few days.

The Brooklyn, an unlikely-names seafood and steak house at Second and University in downtown Seattle is one of my favorites. I love to sit at the oyster bar at the front of the restaurant, look up at the chalk board and see as many as 19 different types of oysters on offer at one time.

A well-stocked place like The Brooklyn is perfect for an oyster education, particularly if you’re there with two or three other adventuresome oyster lovers. I was there once with my sons Lloyd and John. There were 15 different oysters on the board that day. We started by ordering a dozen of each of three different types and sharing them – a third of a dozen each. We went through the entire board that way – sampling and comparing, some of which we had tasted before and others that were new to us.

My preference is raw on the half shell with a squirt of lemon. I like to dip the crusty bread in the cocktail sauce with horseradish. But I’ve never liked to hide the flavor of an oyster behind anything more than just a drop of lemon juice. Oysters at The Brooklyn also can be prepared house-smoked, baked, Olympic, Rockefeller, Kilpatrick, Provencal, pan-fried, and barbequed, with bacon.

I usually avoid places that boast of seafood and steak on the same menu because. I figure they haven’t figured out who they are or who they want to serve, The Brooklyn is an exception. The assortment of appetizers and sea food mains is astounding and I’ve always found it more than satisfying. But I’ve also enjoyed the artistry of the grill masters as they prepare quality beef, pork and lamb over an open flame. The menu also includes quail, duck and chicken dishes. Take a look for yourself at www.TheBrooklyn.com

Another place in Seattle with a wide variety of oysters on offer at any given time is Shuckers in the luxurious Fairmont Olympic Hotel at Fourth and University in downtown Seattle. This spot also has a chalk board listing of the available choices each day – choices that change with the season. Today’s selection, for instance, includes Stellar Bay, Evening Cove, Kumomoto, Willapa Bay, Emerald Cove, Dabob Bay, Hunter Point, Olympia, Sister Point, Quilcene, Hama Hama, Penn  Cove and Wescott Bay Flats. My favorites – Skookums – aren’t in season now.

There’s no oyster bar at Shuckers, so things can be a little slower and somewhat less festive than they are at the bar at The Brooklyn, where strangers chat and exchange thoughts and stories about oysters. As for the rest of the menu at Shuckers, it’s all about fish – fresh, local and well prepared.

I recall a time about 10 years ago, when our son John and his wife-to-be Julie first moved to Seattle. I received a phone call from John one Sunday afternoon. “You’ll never guess where I am and what I’m doing,” he said.

“I’m standing knee deep in the Hood Canal. We have a friend whose parents have a place here,” he said. “I bought an oyster shucking knife for five dollars and I’m picking oysters out of the water, shucking them and eating them.”

That’s about the only way I can think of to get oysters fresher than what is served at dozens of restaurants and oyster bars throughout the Seattle area.

When I first started eating oysters in Seattle in the mid-1970s, it was a revelation. There weren’t many places in California serving oysters and the variety was extremely limited. Now I can walk into Ocean Avenue Seafood in Santa Monica any day and find enough different kinds of oysters to satisfy me. You can read about Ocean Avenue sea food at the restaurant recommendation web site – www.atLarrys.com

Chapter Thirteen – July 24, 2010 – A FOOD LOVER’S TREK, which tracks the travels of Table Talk editor Larry Levine and his wife Jennifer from Los Angeles to Fairbanks Alaska and back has reached Fairbanks. We’re back in the lower 48 – Issaquah Washington, just outside of Seattle. You can continue to follow our travels through Seattle, Oregon, the northern tier of California and the Bay Area at http://www.TableTalkatLarrys.com and click on A FOOD LOVER’S TREK. If you are enjoying these writings please pass the link on to a friend.