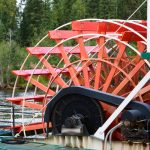 It’s probably the silliest thing I’ve seen on this entire trip. But tonight I picked up a brochure for Chez World Cooking School – Fairbank’s Newest Attraction.

I did this on the way back from a dinner of over-cooked, tough Alaskan halibut.

On the train from Denali to Fairbanks we had dinner with a couple from Pennsylvania – Karen and Glen. They had spent a week in Fairbanks before heading for Denali. I asked if they had found any good restaurants in Fairbanks.

O.K., I thought, we won’t be listening to her recommendation. After we checked into the hotel, I Googled “fine dining Fairbanks Alaska.” Up popped “Alaska Salmon Bake” – the only name on the list. The details: deep fried halibut or cod, barbecued ribs or salmon – all you can eat buffet. It’s a tourist-focused chain restaurant that bastes the salmon in a lemon, butter and sugar sauce, which can only be a way to disguise the fact that it isn’t fresh.

I think I’ll pass on a cooking school that promises “authentic Alaskan cooking demonstrations.” The two best meals we’ve had in Alaska were at the Glacier Brewhouse in Anchorage and on the train from Denali to Fairbanks.

We took a trip today on a sternwheeler along the Tanana River. En route they provided samples of king salmon caught in the ocean off Ketchikan and smoked before ever being put into fresh water. This preserves the fat content and flavor of the fish. It is then canned not in the flakey kind of canned salmon we are accustomed to seeing, but as actual folded pieces of smoked salmon. It is not sold in any markets; it’s available only on line or by order directly from the canning company. It was delicious. So, we ordered a case. The 2010 catch is being processed right now and will be ready for shipping the first week in August.

While I was placing and paying for my order, a woman walked up to the counter and said she had a quick question. “Do you ship to the United States?” she asked.

“We are in the United States,” the young cashier answered.

Americans can be like that – particularly those who are on group tours and don’t want to or need to think for themselves. Cruise ships are particularly susceptible to this cerebral virus. But they don’t have an exclusive on it. The reason it says “New Mexico USA” on auto license plates in New Mexico is because so many tourists have asked hotel clerks and tour guides where they can exchange their American money for local currency.

Which leads me to what I call “the cruise ship mentality”, when it comes to eating. I’ve known for years that people on cruise ships feel they need to eat as much as they can because it’s included in the cost of the tour and if they ate less they wouldn’t be getting their monies worth. And it’s usually the people who are the most over weight who are stuffing the most food in their mouths as fast as they can.

Now I know the same mentality applies to anyone on a group tour that includes meals, not just cruise ship passengers. Our hotel in Fairbanks caters to tour groups. (All hotels in Fairbanks cater to tour groups.) Princess Cruise tours, Holland America cruise tours and Gray Lines Tours all house their clients here. The larger of the two restaurants in the hotel – Nordic Landing – is a buffet place that looks suspiciously like some of the all-you-can-eat grazing stations I’ve seen on cruise ships. It opens at 5:30 a.m. and offers nothing one could call healthy, but there’s plenty of it and you can go back as often as you want on one tour voucher. The oat meal looked like it had been dragged in off the highway by a snow plow last winter. The other restaurant – Red Lantern – which offers breakfast from a menu, doesn’t open until 9 a.m., 30 minutes after the last tour group has set out in quest of the day’s adventure.

I love food. I’m not a gourmet; I’m a gourmand. Before my bypass surgery I would eat prodigious amounts of anything I wanted. But at my worst I was more selective and less gluttonous that these tour group masses.

Someday I would like to compare two numbers: 1) the average number of pounds overweight the members of one of these tour groups are, and 2) the average IQ of the same group. I’m afraid the first number might actually be higher than the second. Does that make me an elitist? A snob? Maybe. But then, when a 5 ft. 4 in. woman weighing 250ish pounds wants to know if a company in Alaska ships to the United States, I think it’s a fair thing to wonder.

Chapter Twelve – July 21, 2010 – A FOOD LOVER’S TREK, which tracks the travels of Table Talk editor Larry Levine and his wife Jennifer from Los Angeles to Fairbanks Alaska and back has reached Fairbanks. Tomorrow they embark on the road back. You can continue to follow their travels through Seattle, Oregon, the northern tier of California and the Bay Area at http://www.TableTalkatLarrys.com and click on A FOOD LOVER’S TREK. If you are enjoying pass the link on to a friend.