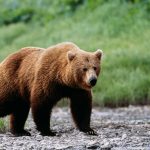 Denali Natural Park and Reserve is not about food. There are no edible fish in the local rivers and streams, which are largely fed by glaciers that carry too much sediment into the water. The local growing season lasts only about 100 days. The nearest “town” from which meat, fish and poultry can be accessed for Denali restaurants is Fairbanks, which is 125 miles away. By train that adds up to four hours. By two-lane road it isn’t much closer.

Caribou and moose are plentiful and can be hunted by permit, but only by individuals and not in sufficient amounts to provide for local restaurant kitchens. There is no game on the menus.

What there is in abundance in Denali, however, are enough magnificent mountains, valleys and rivers and enough wildlife available for viewing in the wild to nourish any soul.

This trip started because Jennifer and I had said for years that we want to go see the wildlife in Denali. Victoria was added because it is on the way and we liked it on an earlier visit. We were scheduled to visit Denali two years ago; reservations already had been made. But my quadruple bypass surgery interrupted those plans.

Truth be told, before yesterday we were wondering if this trip might have been a mistake. Eleven hours in airports and on air planes to get from Victoria BC to Anchorage hardly seemed worth it except for a great dinner experience at the Glacier Brewhouse and the opportunity to eat reindeer sausage, both of which I wrote about in earlier chapters. If we had the advice of a knowledgeable travel agent we would have booked another day in Anchorage to allow time for a trip to the Prince Edward Sound Glaciers. But we booked a Gray Lines Tour through the Auto Club.

The next leg of our trek was a four-hour rather dull motor coach (formerly known as a bus) ride from Anchorage to Talkeetna, where we had dinner, went to bed, woke up, hung around the hotel for a couple of hours and went to the railroad station for the four-hour trip to Denali.

By then we were telling each other that there had to be a better way. If you want to go to Denali, you should just go to Denali and skip the rest of it, we agreed. Easier said than done. Flying from Anchorage to Denali is not an option. It’s a long trip from Anchorage to Denali – 7 ½ hours by train. You would need to be up early to catch an 8:15 a.m. train out of Anchorage that would get you to Denali at 3:45 p.m. – not bad if you want to eliminate the Talkeetna stop. Again, a good travel agent could have helped.

Yesterday turned things around. It no longer matters how we got here, or how smooth or annoying that journey had been. Our 9 ½ hour Tundra Wilderness Tour justified the trip and fulfilled every expectation we had in anticipating this trek.

We saw 10 brown bears (grizzlies). Their fur is actually more blonde than brown. All were sows with their cubs – cubs that were about two years old. Some were close enough to our bus to be seen in clear detail with the naked eye. All were comfortably within the range of my brand new 70/300 mm Canon lens. We saw at least six Golden Eagles, one of which landed in the tundra within yards of the bus and another that swooped and circled around and over the bus as though it had been trained. We saw a full-grown, almost calico colored fox in an opening between bushes, also within yards of the bus. Later, we saw another fox at a greater distance. We saw two wolves sleeping on an embankment about 100 yards away and another one trotting across a field about 75 yards away. We saw grazing caribou outlined on a ridge line magnificently against the gray-blue sky and we saw at least 10 others grazing in fields. We saw a dozen Dall sheep grazing near tree lines, close enough to rocks to feel they could safely escape a sneak attack by a fox or wolf. And we saw at least a dozen Snow Foot Hare.

All this as we drove through glacial valleys and scaled mountains to above the 3,000-foot level. We saw the faces of glaciers on the sides of mountains, the craggy peaks of still growing mountains, and the tops of mountains left rounded by glacial ice in time before imagining.

A feast for the eyes, the mind and the memory.

The new Canon camera and lenses I bought for this trip more than earned their way yesterday. I’ll be taking hundreds of photos home – already downloaded to my lap top and waiting to be sorted, cropped and printed.

Chapter Eleven – July 20, 2010 – A FOOD LOVER’S TREK tracks the travels of Table Talk editor Larry Levine and his wife Jennifer as they make their way by auto, ferry, plane and train from Los Angeles to Fairbanks Alaska and back. A new chapter will be published every day as long as they can connect with the Internet. You can read the earlier chapters by clicking on Food Lover’s Trek above. If you are enjoying this series tell a friend they can follow it at http://www.TableTalkatLarrys.com