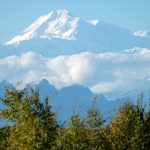 There is no one home in Dixie tonight. They are all up here with us in Denali National Park in Alaska. They come from Louisiana, North Carolina, Georgia, Alabama, Texas and just about everywhere else that people speak southern.

Funny thing is when we did a Panama Canal cruise 19 months ago, no one was home in Dixie then either. They all were on the cruise ship with us. I wonder if any of them are the same people who are in Alaska now.

Tonight, we practiced a pure form of democracy. It was called the Cabin Nite Dinner Theater and it happened at the McKinley Chalet Resort. What it was, was about 150 people gathered in a big log cabin for an all-you-can-eat dinner – family style – plus a show. Seated 12 to a table, we were served baskets of biscuits and a metal communal receptacle filled with salad. All fresh local greens and cherry tomatoes, we were told. The main event, however, was the caldrons of barbecue baby back ribs, baked beans, and corn and platters of barbecue salmon set on each table and replaced as quickly as they were emptied. Our table included a family of four from Redlands California who don’t eat pork. That left it to the remaining eight of us to wipe out the ribs.

Now, this is no way for anyone who appreciates fine food to eat. It’s group food – and tour group food at that. This isn’t a local restaurant serving up lunch or dinner for some service club that meets there every week and needs to be kept satisfied. This is hotel food prepared for people they will never see again. Yet, I got the feeling some of our dinner mates never had eaten so well before – the kind of folks who recommend restaurants based on the quantity of food provided. I had an uncle like that. If the steak filled up the plate it was a good restaurant, even if it took a hack saw to cut it.

Clearly, this was the day our Food Lover’s Trek bumped into reality. And reality is that Jennifer and I are not meant for group touring. It’s not that we don’t enjoy meeting new people. We shared a lunch table today on the train from Talkeetna to Denali with a very nice woman from Baton Rouge and her teen-aged son. We enjoyed the company of the Indian family – husband, wife and two teen-aged daughters – at our dinner table tonight. It’s more that each of us has a background in the travel business and we know what goes into making a profit out of group tour packaging. And each of us really enjoys a style of travel that differs from what Gray Line Tours serves up.

In an earlier incarnation of my adult life I was a partner in a company that packaged tours to Hawaii. My friend and partner told me, before we formed the company, that all the real money in travel is in wholesale tour packaging and there are two ways to do it: high volume/low cost, or low volume/high cost. I knew in an instant which I preferred. We formed a company with the operating theory that there would be no more expensive group tour to Hawaii than we were offering and there would be no tour that provided greater value to its clients. When I met Jennifer, she was the executive secretary to the president of a company that packaged tours to Asia. Before that she had worked for air lines and in the travel business in London and New York.

The tour we are on now went the opposite direction from our old Hawaii tour company. It’s low cost travel for the masses and it’s the first time Jennifer and I have traveled this way. But when you want to look for bears, moose and wolves in Denali National Park, your options are limited. To get here you are going to be on a motor coach – formerly known as a bus – and/or a train and the best way to do that is to book though a tour company. It saves the hassle of collecting and moving luggage from hotel to bus to hotel to train to hotel. It builds in the thing you most want to do – go looking for bears, moose and wolves with a knowledgeable guide who knows where to look.

So, here we are. We didn’t have to do The Cabin Nite Dinner Theatre. But it was included in the tour we booked. All-in-all, the evening was fun enough to allow us to overlook the food issue. After all, it was only one meal on a 22-day trek from Los Angeles to Fairbanks and back. And so what if I ate barbecue ribs on my post coronary surgery diet. I had oat meal for breakfast and a chicken breast sandwich for lunch. And, as Jennifer pointed out, I take great enough care of my diet at home to allow myself a little latitude while on vacation.

So, tonight we practiced democracy with folks from all over America. We sang “Let Me Call You Sweetheart” to the couples celebrating anniversaries; we sang “Happy Birthday” to the seven birthday celebrants; we teased the two Texans in the crowd – at least the two who would admit to being Texans in a state that loves to tease Texas; we sang “Home On the Range”, “My Bonnie Lies Over the Ocean”, “When the Saints Go Marching In”, “You Are My Sunshine” and several other numbers. We waived napkins in the air to summon waiters for more food; we served each other rather than pass heavy food trays around the table; we scraped bones and other food scraps into communal pots in the center of the table and, when it was over, we wadded up our cloth napkins and threw them into our waiter’s apron.

Not once during the evening did anyone mention Sarah Palin, the Tea Party, oil leaks, the economy or any of those other things that are the topic of constant conversation in the lower 48.

Chapter Ten – July 18, 2010 – A FOOD LOVER’S TREK tracks the travels of Table Talk editor Larry Levine and his wife Jennifer as they make their way by auto, ferry, plane and train from Los Angeles to Fairbanks Alaska and back. A new chapter will be published every day as long as they can connect with the Internet. You can read the earlier chapters by clicking on Food Lover’s Trek above. If you are enjoying this series tell a friend they can follow it at http://www.TableTalkatLarrys.com