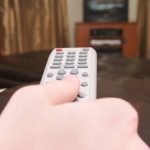 I think Jacques Pepin’s weekly program is the best cooking show on television. He doesn’t compete with anyone, or chop anyone. No reality contests, or hopscotch travels through diners and dives; no tours of bar-b-que joints, or endless decorations of cakes no one would ever bake at home.

Pepin just cooks things you might want to cook at home and he takes the time to discuss the ingredients and techniques. If he ran a cooking school I would want to enroll. Unfortunately, his program is on at 4 p.m. Saturday where I live so I don’t get to see it most weeks. I’m often busy or out of the house at that time. If I’m home I’m probably doing something that keeps me from the television, like starting to prepare dinner or getting ready to go out for the evening.

I like Bobby Flay’s throw downs because they give me ideas I can adapt to meals I would want to prepare at home. His ciopino and paella throw downs inspired new ways to prepare dishes I had made for decades. His Feast of the Seven Fishes throw down propelled me to dinner at Rao’s in Las Vegas. Throw downs manage to be instructive and entertaining at the same time.

I can’t say the same for most of the Food Channel programming. I’ve heard that the daytime schedule offers more instructional programming. But I’m at work most days, or playing golf, or doing any number of things other than watching television.

The nighttime schedule has become less and less about food and more and more about programming. How often do we learn how to prepare a particular dish by watching Iron Chef? Do I really want to watch a competition among the world’s worst cooks? When is the next time I’m going to assemble a group of friends to prepare a meal for 100 marines? I don’t want to watch a bunch of people trying to become the Next Food Network star; I’m a good cook and I want to learn how to become a better cook. I want inspiration for my next dinner party.

The Food Network is a commercial venture. It needs strong numbers of viewers to support advertising rates. So, programming is going to be guided by the numbers and Wiki says the network is viewed in some 90 million households each week. I may not be a fan. But I don’t think they’ll miss me.

Now, if I could just get Jacques Pepin on at a more convenient time.