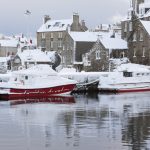 The full title is Mackerel at Midnight – Growing up Jewish on a Remote Scottish Island. It’s written by Ethel G. Hofman, a syndicated food journalist, cookbook author and past president of the International Association of Culinary Professionals. And it’s a fascinating tale of social history, food and two diverse cultures that meet in a very unlikely place.

Harry Greenwald fled Russia in the early 1900s and settled in Lerwick in the Shetland Islands, north of the mainland of Scotland. The only Jew in a Christian community on a remote island, Harry opened a shop on Commercial Street from which he sold anything and everything the community needed for daily life. The shop turned into a social center, where locals gathered for conversation, an exchange local news and gossip and to join Harry for a dram of whisky.

In 1935 Harry married Jean Segal, a woman he barely knew. She had grown up in Scotland in a poor but observant Jewish family. Together, the started a life in “a Christian community, with one hundred churches and halls where a devout Christian population worshipped, but with no rabbi, no synagogue – none of the support systems of Jewish life.”

Author Ethel G. Hofman is one of the three children of this marriage. In Mackerel at Midnight she describes the family’s commitment to maintain its Jewish identity and how they became not just accepted but an integral part of the community. Food and the cooking of Jean Segal Greenwald were central to their existence and their interaction with those around them.

Threaded through this memoir/cookbook are many of the recipes “our Ma” prepared for the family – the only Jewish family on the island until after WW II. We also learn of the critical role Lerwick and Shetland played in the Allied defenses during the war and how the Greenwalds and everyone around them welcomed troops stationed in the city into community life.

Recipes for traditional Jewish style dishes that “our Ma” prepared for family and friends are scattered throughout the book as are other recipes for meals created out of the opportunities presented by life in a fishing village in the cold reaches of the North Atlantic.

Jennifer and I visited Lerwick and the Shetland Islands in the summer of 2009. We stopped at the site of the Greenwald’s old shop. We walked the streets that trace their origins to the days when Harry Greenwald arrived from Russia, Jean Segal Greenwald arrived from Scotland, Ethel Greenwald Hofman played as a young girl, Allied troops enjoyed the hospitality of the locals, and families came together to meet the challenges of life in a distant and difficult environment. Our visit was far meaningful because we read this book.