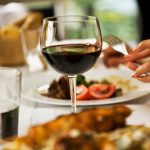 The emailed invitation couldn’t have been more timely. Melisse was having a special wine pairing dinner featuring wines from the Alexander Valley in Northern California.

It was one of those “life sends me a message” moments. The event was on my birthday, May 5, and I already had decided I wanted to go to Melisse for my birthday dinner. (You can read more about Melisse at atLarrys.com – http://www.atLarrys.com )

The evening included eight different wines from four different wineries and Melissa chef/owner Josiah Citrin did an outstanding job of pairing the food courses to the wines. Clearly, I left my post-cardiac surgery diet at the curb before entering the restaurant.

From Souverain, we tasted a terrific 2008 Sauvignon Blanc that was paired with duck confit fritters, smoked salmon potato blini and rolled goat cheese with grape and chopped pistachios. Souverain also offered a very, very good 2005 Winemakers Reserve Cab Sav that was paired later with a dessert course of Reblochon Tart, which was Josiah’s way of not offering a sweet with a Cab.

Maine lobster with porcini mushrooms and eggplant in a rich broth was served with a Stryker 2007 OZ Vineyard Semillon and a Munselle Vineyard 2007 Shadrach Chardonnay. The Chardonnay was excellent. I could do without the Semillon

Roast Stuffed Quail with forbidden rice, kale and spiced black olive tapenade was next. With it came two Cab blends from Skipstone – a 2005 Oliver’s blend and a 2006 Oliver’s blend – two wines from the same house on consecutive years yet completely different to the taste. My favorite? The one I was drinking at the time. I’ll add some of each to my locker.

Next up was ribeye and braised short ribs with dijjonnaise, fava beans and a Bordelaise sauce joined by a 2005 Estate Vineyard Cab Sav from Stryker and a 2006 Coyote Crest Cab Sav from Munselle. This deep into a meal, it’s challenging for a wine to stand out from all that came before. But these two held there own.

What a way to spend a birthday. Anyone who has looked at atLarrys.com knows Melisse is one of my two favorite restaurants in California. The other is Biba in Sacramento, where I celebrated last year’s birthday.

There can be an Avis/Hertz tone to the conversation of some Alexander Valley winemakers. They should guard against that. The Alexander Valley has no reason to take a back seat to the Napa Valley when it comes to quality wine.