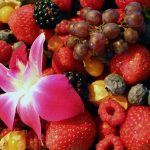 Believe it or not, this old Brooklyn street kid has been shopping au natural since he was 5 years old. It started with summers in the Catskill’s. My cousins and I would take our little buckets and “shop” the hillsides in quest of wild berries. Then we’d take them down by the lake, sit with our feet in the water, rinse the berries and eat them. Rinsing probably wasn’t necessary because no one was spraying anything on the wild berries. But our parents insisted and we weren’t old enough to argue.

Later, after we moved to Southern California, there were the annual trips to Beaumont and Banning each spring. My two sisters and I would grab a ladder and a bucket and climb up into cherry trees and pick away. One for me and one for the bucket. Never mind washing before eating.

Back in Brooklyn, my grandparents had a huge Bing cherry tree growing behind their two story brownstone. We could lean out the second floor windows and pick cherries.

It’s no surprise then that my favorite pie is Maine wild blueberry pie. The one served up at Nunan’s Lobster Hut in Kennebunkport is something special.

A couple of years ago, Jennifer and I were driving through Oregon. She was feeling a little sleepy and asked if I was up to taking the wheel. She pulled off the highway and stopped right next to a wild black berry vine. I got out on the passenger’s side and before Jennifer could come around the car I had picked a black berry, tasted it and picked another for her. Yum. You can’t get anything like this in a market.

And here’s the clincher. I find the drive through California’s central valley on Interstate 5 inspiring. I can’t relate to those who call it boring. I can drive by the fields at 80 miles an hour and identify most of the crops. I’m in awe of how human initiative has turned that barren land into some of the most productive farm land in the world. There’s more cotton grown in the central valley than in the entire south. Ninety percent of the world’s almonds come from the valley.  Apples, cantaloupe, corn, tomatoes, walnuts, alfalfa, rice, you’ll find all these and more in abundance in the central valley of California.

Which brings us back to the Hollywood Farmers’ Market. I find it invigorating. Two sides of one closed-down street are devoted to food booths where shoppers pause for any number of ethnic treats. As for the rest, if you can’t find it here it probably isn’t in season. In addition to the row crops and tree fruit, there are stands selling fresh baked bread, dairy products and farm fresh eggs.

But it’s the ambiance that sets the Hollywood Farmers’ Market apart from the many other wonderful farmers’ markets that dot the Los Angeles landscape. On a bright, sunny Sunday morning the Hollywood Hills seem close enough to touch. The mood is upbeat as people of all ages meander along more than half dozen city blocks lined on both sides with booths in the heart of Hollywood. There is music playing, people laughing, strangers sharing recipes, young children growing up with an appreciation for the special quality of produce that goes direct from the farm to the consumer. It’s pure L.A.

Let us know about your favorites by commenting below.